Su Zi's review of THE GREEN ORCHID by Connie Helena 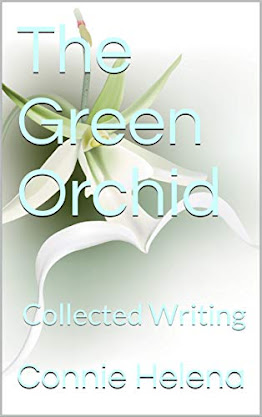 First books are definitive entities: the labor of the writer born into the world and flown to the reader; emblems of hope, sometimes. Some first books are as self-published as Whitman and sit as comfortably on the bookshelf as books from presses large and small. An enterprising reader might have once stumbled upon a debut collection in an independent bookshop, but nowadays a debut work can pop up on social media and be acquired with a fiddle of the fingers. Such is the case with the debut collection of both poetry and prose by Connie Helena, who posts art on Instagram as creativeflorida.

In a perfect bound, trade sized edition, with a 2020 copyright, Helena presents six short stories and a section of poetry. The poems are separated as individual poems by sometimes ending on the page, with the next page’s poem continuing often without title. Since the topic of these poems is a particular and romantic relationship, the poems lend themselves to being one long poem in episodes. During this excursion into intimacy, the poems’ lines alternate between a loose narrative structure and moments that hold much promise for further work from this writer: “ I am a bruise shaped like a butterfly” (79) is followed two and a half stanzas later with “ I’m your angel sugar pie/ I’m your sweetness super fly”(80). Helena is wise enough to filter the traditional trope of love through personal perceptions that include momentary references to the seasons to indicate the passing of time.

Helena’s short story offerings here are of another genre, uniting in various dystopian views that include ironic humor. Each story begins with a shocking premise: In “ The Cardinal”, the opening story, an infertile woman harasses patients at a health clinic; in “Cannibals” a teacher is undone by a false student; and in the book’ closing story, “The Last Violence”, a crew of astronauts seeks to introduce humans on a distant planet. It is in these stories that Helena shows a deftness in writing—each story’s premise is a bit nauseating, as if culled from distasteful news stories and re-envisioned. Of these, the premise of “ The Last Violence” might be the most appalling, as our beloved planet is destroyed in the story’s opening action. The reader is then introduced to the characters, who are mostly symbolic—the large male security soldier, the earnest communications officer. Also introduced is the division between these characters of those who engage in physical sex versus those who meet their neurochemical needs with a pharmaceutical cocktail.  “He could tell right away she did Natural—it was in her eyes and the way she walked. The long hair indicated it as well because most women cut theirs short once they began taking maintainers in the teen years (103)”. It is this absurdity in the story that clues the reader to the forthcoming twist.

In the six stories presented here, told with varying tempos to their narrative arc, there is a hyperbolic moment that clues the crash of a climax. Each story ends with a bit of dark humor. Helena’s knack here is taking the most ordinary conceit in a story, prosaic and Hollywood enforced narrative cliches in character, and detailing their undoing.  If a debut collection is a promise of what else a writer might have to offer in time, then readers ought to keep lookout for this writer’s short stories; witty and slyly feminist, darkly amusing, Connie Helena debut’s work is a fine start indeed.

The Green Orchid is available on Amazon.