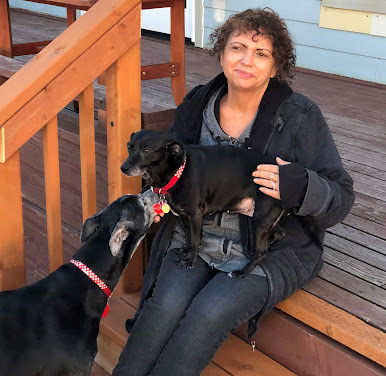 Lana Hechtman Ayers makes her home in an Oregon coastal town of more cows than people. As managing editor at three small presses, she has shepherded over eighty poetry collections into print. She holds MFAs in Poetry and in Writing Popular Fiction, as well as degrees in Mathematics and Psychology. Her work appears in numerous print and online literary journals such as Rattle, The MacGuffin, and Peregrine, as well as in her nine poetry collections and a romantic time travel novel. Visit her online at LanaAyers.com.

Things You Will Learn About Me After It’s Too Late

As soon as I could hold a crayon I wrote

poems, one about a bunny who had no tail.

I wanted to grow up to be an astronaut

so I could escape the gravity of childhood.

My first crush was on the winter night sky.

In a crowd of people, mosquitoes swarm me.

Sleep was never a friend.

Barbie, a sworn enemy with her wasp waist

I could never grow my natural afro hair

much below my ears.

Hula hoops and I reached a truce.

I have failed at everything,

some things more than once,

some things a thousand times.

This hasn’t stopped me.

The forest canopy is my adopted family.

Coffee is a verb.

My heartbeat’s aligned with

Klutz, I have spent my entire life falling.

First, in love with darkness, then shadow.

Once, I rolled down a hill and would have

kept rolling forever except for my head

colliding with a cedar tree—

thankfully the tree was unharmed.

I trip over words, especially goodbye.

I fell into Mathematics as a major

in college and am still solving for x.

Stumbled into the oblivion of

I teeter on the see-saw of self-loathing

but a fulcrum of constant panic

My life story is the autobiography of rain.