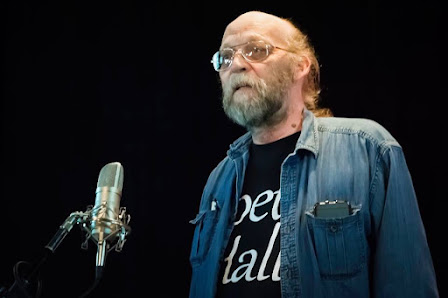 Lennart Lundh is a poet, photographer, short-fictionist, and historian. His work has appeared internationally since 1965. An online search will reveal most of his books, other writings, and readings. It will also probably give you information on the late Swedish actor after whom he was reportedly named.

Short Essay Exam
If you water the shadow of a tree,
dark against the sun-white sidewalk,
what will grow there by your act?
And if you’re three years old,
and you water the shadow of a tree,
what will grow in you with the years?
And if you’ve grown, old but not concrete,
will you watch out the open window,
cheering other water, other shadows?
(after watching the 1996 short film Prelude, by Guy Sherwin)
Wake Field
I’m walking with a cat
in a fog-chilled graveyard
haunted through centuries.
This isn’t my cat,
they’re not my ghosts,
and they’re no more
interested in bothering me
than I am in being frightened.
Their elusive, flowing shapes
are wrapped in the mist,
unreflected in the damp
surfaces of stones and statues,
as their voices are lost among
the sounds of wind-tossed
leaves and my footsteps.
My ghosts don’t wait here,
occupied as they are by
inhabiting every heartbeat,
every thought that contains you.
(after the 1964 photograph “Wakefield, West Yorkshire”, by John Bulmer)
The Bride
She sits alone in her wedding gown.
She sits alone, a princess
whose prince changed his mind.
She sits alone as the sun sets
on her husband’s home, now hers,
coached but unsure of the future.
She sits alone on her wedding night,
her new husband called by his king,
leaving her to mourn without knowing
if he’ll return to her or be returned.
She sits alone with all the possibilities.
(after the 1903 painting by Wassily Kandinsky)
Working Backward
Far into a future we won’t see,
the star that binds all this will die.
With time, the sun that feeds us
will eat this planet like a snack.
Eventually, all traces we leave
will crumble back to their source.
Sooner or later, our kind will either
disappear or abandon the Earth.
After you and I are gone, this house
in which we are making love tonight
will be swallowed by fire or forest.
Or maybe not. But, for now, please
ignore the things beyond the curtains:
Hold me as if every word were true.
(after an unattributed photograph of an abandoned house in the Republic of Karelia, Russia)
- September 22, 2022