Send 5 of your best UNPUBLISHED (some exceptions with special features) poems/flash fiction pieces and bio note of approximately 75 words in the body of an email but send jpeg photo (head shot) as attachment to gypsysubmissions@yahoo.com If you don't hear back within 10 days, it's a pass. Wait at least 2 months before trying again. 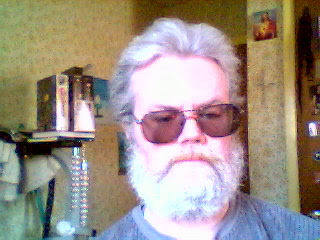 JB Mulligan has published more than 1100 poems and stories in various magazines over the past 45 years, and has had two chapbooks: The Stations of the Cross and THIS WAY TO THE EGRESS, as well as 2 e-books: The City of Now and Then, and A Book of Psalms (a loose translation). He has appeared in more than a dozen anthologies, and was recently nominated for the Pushcart Prize anthology.

tracesTire tracks left on the highway weeks ago,that swerve toward the shoulder, onto it,holding, holding, then sharply back onto asphaltjust before the pillar of the overpass, outto the outside lane then back all the way ontothe asphalt of the exit before the tracksfade like a long exhalation after breathwas held in the clench of the lungs too long,and drivers note it, almost as a dutythat one who clings to the rope of breathowes to another clutching at riggingin the wind and dark spray of the sea,knowing that the water can hide its reefsand there are only so many ports till you drown.

The boat is leaking, but it keeps chesting down the river toward an unseen ocean.
The wood is rotted in places, and repair crews curse and sweat, saw and hammer,
pause to tear at a sandwich, drink a beer, then continue,
while others repaint the gilded globes and railings and the blind wooden figurehead,
a once-lovely woman with a sword pointed toward the future.

People walk the decks and halls of this floating city like urban streets or dusty roads,
going from this life to this life to this life, links in a chain of days and events,
and some of those walkers are chained by the ghosts of chains tight on their necks
or loose in their thin, alert fists, and by the real chains forged in the past
that shackle the future as it sails into now, chains as real as the echoes
of a voice crying out for air, for water, for life, for the end of the oppressor's
fists and clubs and knees and dogs and guns, the brute constellations of pain
spinning in the dying sky of a child's vision as it vanishes.

Bodies slide in sheets off the boat, or are tossed overboard, or leap into the current
to float away, free and dead, chained and dead, alive and dead and dead and dead.
Hands like withering roots cling to the rails, to ropes that extend like vines
from the dead, flowering wood of the ship.  Hands throw deck chairs to the swimmers
to help them or to hurt them.  Hands lift cocktail glasses and salute the sunset,
the wisdom of the Captain, the sturdiness of the creaking, leaking ship, and themselves.
Deckhands scurry here and there on tasks, sweating and cursing, hungry, thirsty,
too busy to hate the bloated ship's officers, the pale, larded first class passengers
like plucked chickens in pastel suits and glittery gowns, among whom servers wander
bearing trays loaded with choice pieces of anonymous lives on wedges of buttered toast,
smiling as they look at the swollen throats like over-ripened fruit awaiting the knife.

The boat surges on, cutting through water that bleeds sludge and poison and plastic bottles.
Its engine vomits smoke, clatters and screeches and labors to lift pistons and pull and push
bars of oil-crusted metal, tended by oil-sticky men and women who feed it coal and gasoline
and lives that will end with oil-crusted lungs vomiting smoke, gasping and laboring to breathe.

Flags and pennants festoon the boat, rattle in the sky at dawn and sunset.
Trumpets announce its passing to turtles in the reeds and deer nibbling the bushes.
Covered wagons and trains and Greyhound buses move along the riverbanks
in lives long gone and here and to come.  The boat moves on, relentless,
as if it thought it believed it would never end, but felt the Sword of Time
itching the back of its neck, and the end of all possibilities.

The blissful and ignorant river carries the boat like a small child on its back
in the slow restless rush to the inevitable sea, unbounded to the eye,
as open as the sky to the soul.  This hunger for largeness, for a time
endless as sea and sky, of chances without horizons or chains, is in the hold
of the boat, and flitters in the rooms and down the corridors, and dances with the music
in the ballroom at night, where people spin like constellations or the wheel
in the casino, where lights flicker like flames.  This hunger is what the people consume,
and what the ship consumes, and what emits from the smokestack as clouds of black gas
that break into bird-shapes and shatter, while the gulls and hawks wheel
forever above the boat, crying like the lost, silent like the hunter.

A man and a woman stand at the railing, looking through all of the sky for hope.
Among the clouds, the waving leaves of trees on shores , the birds, the smoke,
the visions that spring up inside like roots and tendrils, they'll find what's there.
The voice of the far-away sea reaches the boat, and fills it like breath for the living.